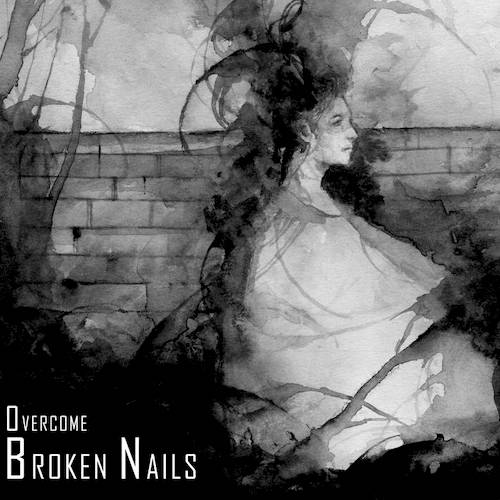 Overcome by Broken Nails, a most promising darkwave synthpop debut, dropped right at the start of the year on the independent label SwissDarkNights. The album is a project by Kim Bell of Louisville, Kentucky, and she’s inspired by darkwave, minimal synth and EBM sounds. It shows in her work too, which is primarily composed from analogue synthesizers and drum machines. Her vocal delivery style, coupled with her dark, cold and melancholic synth laters, present dance worthy gems with 80’s flashback tendencies.

The album opens with Mirror, an upbeat synth track that isn’t. “No escape, no place to hide, nothing left,” is what Bell sings matter of factly. Being pursued and trapped is a theme on Overcome, one that is seconded on Phantom where something is coming for her, and it’s our favorite track of the album. Cornucopia‘s cold wave is delightfully chilly and a bit reminiscent of another blonde, Dale Bozzio. Control the Delusion reminds us that control is a delusion, something that’s been made abundantly clear in the past year. Never Let It Go is another album favorite as Bell confesses, “You’ve cursed me into isolation, sinking further away from who I really am. The cold heart feeling that runs through my soul.” The synths on I See You are perfection coupled with Kim’s disaffected and detached vocals and whispers. Sovereign, the most mainstream club worthy track, is the single. It’s also where Bell takes back her power telling us, “You won’t take me!”

The album then gets edgier with Advance bringing some 90’s flavored EBM coupled with her shouted vocals thick with reverb. It’s the icing on the Overcome cake that makes us really wish the clubs were open. The album closes with an ethereal version of Phantom which is an unnecessary extra when the original is so good. Including it is as confusing as the cover choice. Whoever made the art direction decisions shouldn’t have. All in all though, Bell’s long play debut is a winner and we look forward to more in the years ahead.