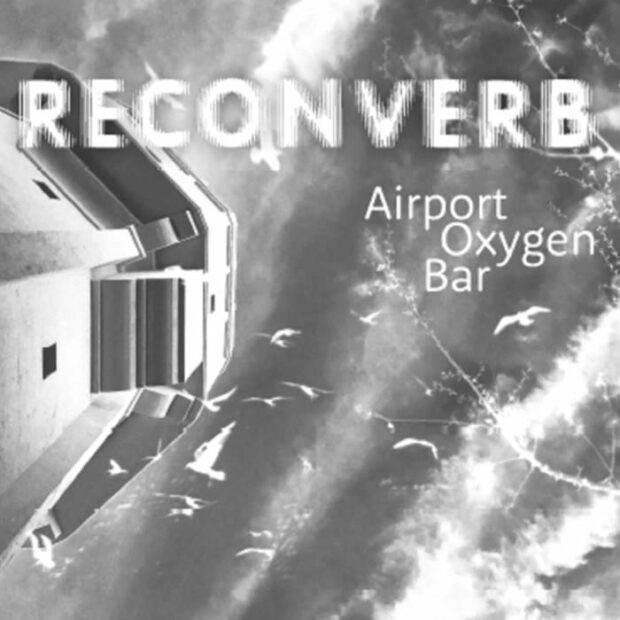 Today we’re heading to Denmark, home of Helge Vammen and his post-punk coldwave solo project Reconverb. Vammen has released his second full-length entitled Airport Oxygen Bar, and it was written and recorded by Vammen himself, and produced by darkwave favorite Pedro Code of Iamtheshadow. You might remember Code from our Essential 2020 Albums list, so you know Vammen is in good hands.

A professional athlete before he started playing and recording music, Helge began spending a lot of time modifying and building guitars from collected parts. Eventually he started messing around with synths and combined the sounds with reverberated guitars. His influences were eclectic. He loved 70’s and 80’s synths (Kraftwerk, Jean-Michael Jarre), as well as dark ambient music, post punk – and noisy rock alternatives like Sonic Youth. He released his first album, Unreversed, in 2018 and quickly followed it up with the 2019 EP Heraldik.

Airport Oxygen Bar is Vammen coming into his own, a departure from his previous releases even if it revisits those themes from time to time. Unreversed was an instrumental darker dreamy take with legendary surf music styling and 80’s synthwave undertones, as well as dark ambient palate cleansers. Vammen was mixing those Fender Jazzmasters, Jaguars and a six string bass with dark analog synthesizers to create something atmospheric and powerful. Heraldik then introduced us to his hushed and honeyed vocals, giving us a taste of what he might be capable of. Airport Oxygen Bar is the fulfillment of that promise and then some. While it’s still dark, dreamy and predominantly guitar driven, Vammen’s grown into his own and his often unique unlit sound here is a winner.

The album kicks off with the darkwave track Vanishing Paintings. White Light / White Heat writes, “Danish guitar freak Helge Vammen, increasingly at ease with his dreamy vocalizations, crafts as usual intoxicating dire, poignant guitar melodies sewing emotional turmoil through treacherous lashing rhythms and low bass oscillations, while soft, frightened male vocals release angsty twinges of distress into the synthetic laser pulses searing stabs of impending doom.” Vammen’s vocals are often layered into atmospheric walls of sound or float beneath the surface, so much so that they at times become abstractions. We’re not quite sure what he’s saying, all while realizing it doesn’t really matter. We get the feeling, and his voice is often another instrument in a collage of sound.

The intimacy of Sour Soil, the deeper prominent vocals on “Eventually, We Merge”, each track draws us further in with all kinds of interesting little aural treats and touches along the way. Perhaps this is Pedro’s influence on the project? On Increasing Rash shoe gaze takes a stronger role amidst distant heavily reverbed shadowy vocals. Afternoon Shift takes us back to that somber dark surf sound of Unreversed, but only so briefly, preparing us for Behind Closed Doors, a collaboration with Code himself. Echoing distorted voices try to tell us something, growing louder, then we hear Code’s soaring synths and baritone which eventually blend with Ammen’s guitar work and whispered warnings. Whatever is happening behind closed doors may not be good, but it sounds incredible.

On They Used to Be a Memory, probably my favorite track on the album, the guitars dive us deeper with Vammen’s submerged vocals sinking into the void. The result is hypnotic, seductive and my body can’t help swaying to the beat. Beyond Disconnection, in case you want to disconnect yourself, shoots towards that Unreversed synthpop dark surf experience, with vocals leading us to pull the cord. Hem, another favorite, takes a step further down sewing spaced out thoughts that are dangerously over oxygenated. We’re under the influence, then the pounding drums come in, adding to a sweeping dronescape backdrop and one thing becomes very clear – Reconverb really needs to be on your listening radar.

Reverse Ray is equally excellent, a perfect late night soundtrack for driving down the coast. 97 is the real darkwave finale here too, an ominous pulsating instrumental that crashes on you like a ten foot wave you never saw coming. I only wish it was longer, and there are several other tracks that feel like they finish mid-way as well, leaving us wanting more. The album closes by revisiting the S Y Z Y G Y X Vocal Remix of Odd Birds – which appeared on Heraldik two years ago. It’s a great track, but I don’t think it adds anything here, particularly after 97’s closer.

The Odd Birds do connect, however, to the peculiar cover art with the questionable font selections – an ongoing thing for Vammen I don’t see working. Airport Oxygen Bar’s title feels like a miss/misrepresentation as well seeing as the music isn’t reflected by it, nor do I see it being used for chilling at the day spa. What is contained on the album is quite strong, at times rather awe inspiring, and often too brilliant for the choices made to misrepresent it. Airport Oxygen Bar is a place worth visiting, repeatedly, and it’s now available everywhere on Cold Transmission Records.