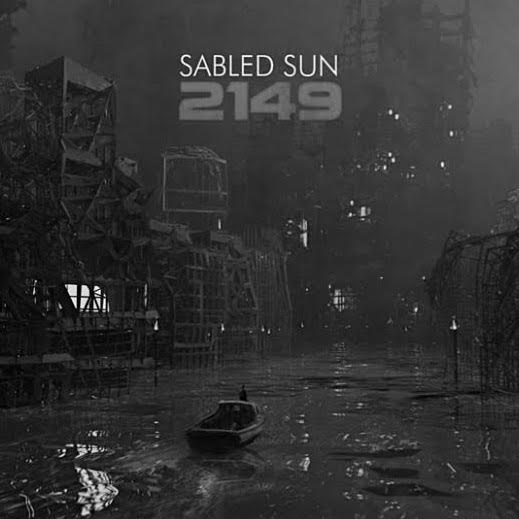 Sabled Sun has been releasing a dark ambient atmospheric series of releases about a man who was placed in hibernation who then wakes up years later to find a world in ruins. The series begins in 2145 and this latest installment takes us into his fifth year, 2149, where we gain access to one of the autonomous underground cities in Sector 33. While the premise may sound a little hokey, the infrequent dark electronic nods to robotics, quarantine zones, etc, ultimately add to this aural sonic adventure as we descend into endless chasms beneath the surface.

The Cryo Chamber release on Bandcamp comes with a deluxe 16 page hardcover DigiBook that explores parts of this setting and the stunning artwork was created by Oregon’s Simon Heath himself to go with what amounts to his audio-cinematic masterpiece of the series, one that he wrote, produced, performed and mastered as well. This is Darkness writes, “Dark ambient / drone soundscapes are combined with cyberpunk electronica, to create a masterpiece of cinematic story telling, full of emotive melodies and heart-breaking beauty. In places, as we’re pulled down into the depths of Sector 33, it’s bleak and almost suffocating… Outstanding!”

Sabled Sun is Heath’s “Futuristic Post Apocalyptic” project, though you might already know him as Atrium Carceri or the force behind the Cryo Chamber Label itself. He told Santa Sangre Magazine, “Atrium Carceri is a more personal project and I usually start every studio session with deep meditation to get into the right mindset and connect to my dream self, or at least open up those memories and channels. Sabled Sun on the other hand is produced more like a soundtrack for a movie, it is more ‘scene’ oriented compared to Atrium Carceri. I also don’t use test listeners with Sabled Sun.”

The space ambient adventure shouldn’t be as much of a surprise considering Heath’s favorite film to this day is Bladerunner. “For me the fascination of sci-fi comes down to how humanity is changed by technology and how much we gradually change when we stray from our caveman roots. I am also fascinated with anything post apocalyptic, be it zombies or just post nuclear war.”

We love the post-apocalyptic too and we won’t tell you about what happens in 2149, only because we don’t want to spoil it’s surprises. Daniel Edenfield writes, “The beauty of this series of albums is the mystery. We are given subtle cues to propel our imaginations, yet not enough information to tell us what exactly is happening. For instance: we do not know the planet upon which this story takes place, nor are we certain during which particular Age/Aeon whence this story unfolds. We are given the title 2149, and a leading narrative that five years have transpired since the first album in the 21xx series… and you can read further into the story on your own.”

For us the journey is really a dark ambient one with occasional science fiction moments, rather than the opposite. Some of the music is chilling as the synths, drones and field recordings paint a portrait that at times is truly breath taking – like the final parts of Redacted – chills. And if you do enjoy 2149 as much as we do, you’ll probably want to go back and see what happened previously on 2145, 2146, 2147, and 2148.